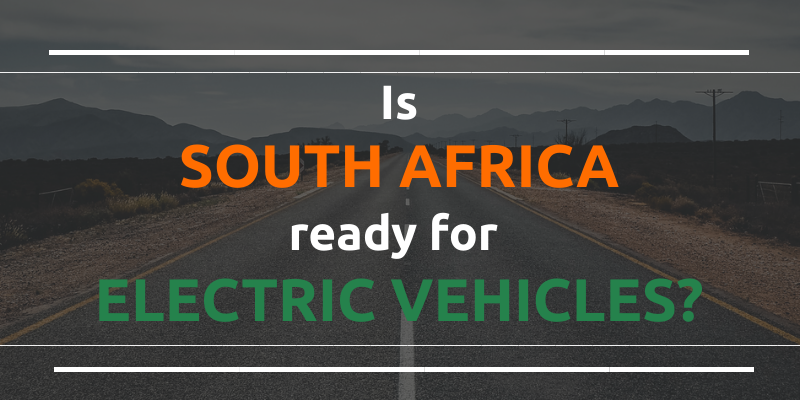 Globally, air pollution kills over 7 million people every year. In South Africa, air pollution from coal-fired power stations is thought to kill 2,200 people annually and is a leading cause of lung cancer, heart disease and stroke. Many of these power stations are owned by Eskom, the country’s government-owned energy provider, who are currently struggling to fulfil energy capacity and are in debt and require a government bailout. Air pollution in South Africa is also a cause of numerous bronchitis and asthma cases. Every year, this costs the country over R34 billion, through the costs of hospital admissions and lost working days.

A possible solution to reducing air pollution in the country is to utilise more renewable, greener energy resources, such as electric vehicles. South Africa and Eskom have stated their intentions to move forward with cleaner energy, announcing to the Paris agreement that by 2050 they will have 3 million electric vehicles on the country’s roads. This will require an investment of 6.5 trillion over the next 4 decades.

Some say this is optimistic considering the economic and energy issues Eskom and South Africa currently face. There is also the question of whether electric vehicles will improve the countries carbon footprint, as the production and charging output of electric vehicle batteries can actually increase air pollution if the electricity is produced by coal. Finally, there is a worry the country lacks the infrastructure, to effectively provide enough power and incentive, to persuade South African citizens to purchase an electric vehicle.

Although South Africa is currently behind many nations in regards to the production and trade of electric vehicles, the country is a major player in the production of fossil fuel vehicles. It is the largest vehicle producer in Africa and the 25th largest in the world. 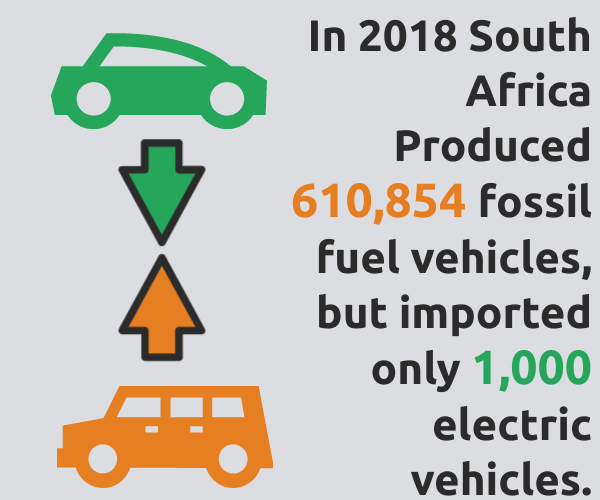 There are 8 auto assembly plants in South Africa. These include BMW, Ford, Isuzu, Mercedes-Benz, Nissan, Renault, Toyota & Volkswagen. In 2018, the country produced 610,854 vehicles, 200,000 of which were exported into Europe and 140,000 to the rest of Africa. The remaining vehicles were sold domestically. This market contributes to 7% of South Africa’s economy.

In terms of the electric vehicle market, South Africa imported just 1,000 Electric vehicles last year. There are also only 2 electric models available on the market, the BMW i3 and the Jaguar I-Pace.

Last year, Eskom reported a loss of $1.5 billion. In the next 3 years, they will require a government bailout of $8.8 billion in order to keep operating. South Africa is also experiencing it’s latest period of load shedding. These are planned rolling blackouts, implemented by the government in times where the demand for electricity outweighs the capacity at which it can be produced.

In order for South Africa to create a sustainable future with renewable resources, they can’t solely rely on Eskom to provide energy. They need privately-owned renewable energy projects to contribute, which is a struggle in itself.

As the production and exportation of fossil fuel-powered vehicles is such a vital part of South Africa’s economy, many are worried about the impact an increase in the production of electric vehicles may have on the industry. 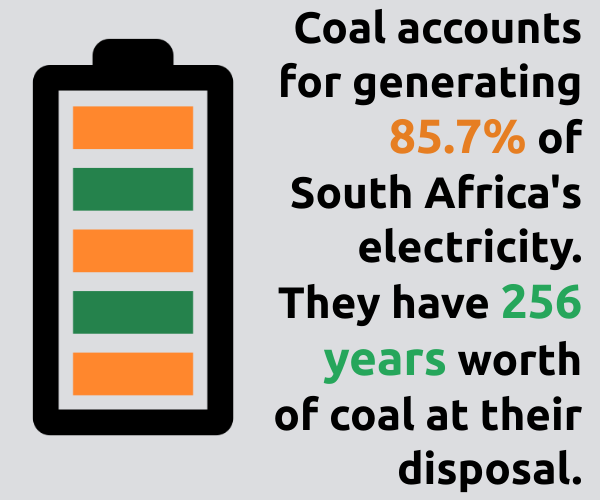 The health deficiencies associated with coal are clear. However, with the current plight South Africa find themselves in with regards to energy shortages, many believe relying so heavily on renewable resources could worsen their economic situation. If implemented correctly, greater dependence on renewable energy resources will help to resolve the country’s energy shortages. However, it could take time to implement these changes, as coal is the dominant source of South Africa’s energy resources, accounting for generating 85.7% of the country’s electricity.

Not only are fossil fuels an essential factor in South Africa’s energy infrastructure, but they also play a significant part in the economy and employment levels. Coal is a cheap source of energy for South Africa, who still have 256 years worth at their disposal. Given the financial issues Eskom is facing, simply switching completely to renewable resources is seen as a waste of valuable energy resources, vital for the economy.

EV’s can be worse for the environment

There are also questions over the eco-friendliness when it comes to charging electric vehicles. If electric vehicles are charged with coal-generated electricity then this can be more harmful to the environment and produce more CO2 emissions than it would be to power standard fossil-fuel vehicles. As previously mentioned, 85.7% of South Africa’s energy is generated by coal.

Particulate matter is also a major contributor to air pollution, as well as a danger to human health. A large percentage of this is attributed to tyre and brake wear from vehicles. Electric vehicles may cut down on CO2 emissions, however, they will still contribute to particulate matter due to using brake and tyre wear. 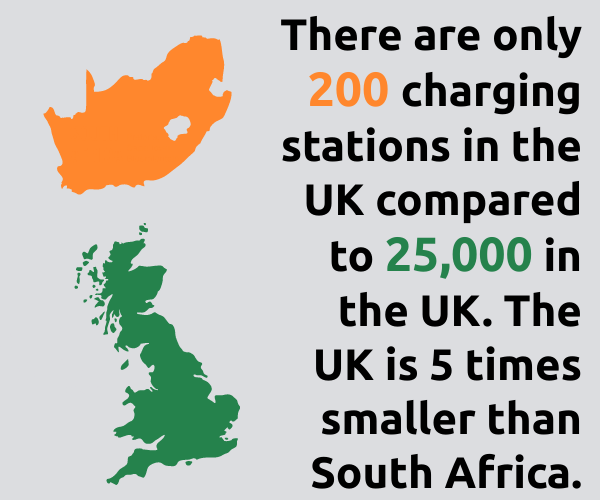 Currently, South Africa lack the infrastructure in place to provide sufficient charging bays for electric vehicles travelling long distances in the country. There are 200 charging stations in South Africa. To put this into context, there are approximately 25,000 in the United Kingdom, which is 5 times smaller than South Africa.

If South Africa is to convince its citizens to switch their fossil fuel vehicle for an electric engine to improve the countries carbon footprint, then the government must make incentives in order to encourage them to do so. Whether it’s through subsidising electric vehicles, decreasing importation costs or introducing more charging stations to the roads, currently enough isn’t being done to convince South African’s to trade-in.

South Africa and Eskom have made their intentions clear when it comes to electric vehicle use and utilising more renewable energy. Putting 3 million electric vehicles onto the roads by 2050 will reduce greenhouse gas emissions significantly, however doing so will require a considerable investment as well as a change in infrastructure.

With Eskom’s debt currently standing at $1.5 billion and with them requiring a government bailout of $8.8 billion in the next 3 years, they don’t seem well equipped to lead this renewable energy revolution alone. This means privately-owned renewable energy projects and investments are required for South Africa to move forward and adapt to these changes. NAAMSA (National Association of Automobile Manufacturers of South Africa) along with car manufacturers Nissan, BMW and Volkswagen have stated their intentions to promote and encourage the electric vehicle revolution in the country. This level of independent investment will be vital for the country to create a sustainable, green future.

Finally, perhaps the most important change needs to be with South Africa’s energy production. If utilising these electric vehicles is to reduce the countries carbon footprint and greenhouse gas emissions, then South Africa must invest in more renewable energy resources being produced. South Africa currently uses coal to generate its electricity, which increases levels of CO2 pollution in comparison to internal combustion engines. In order for electric vehicles to reduce the country’s carbon dioxide emissions, the electricity used to power these vehicles must be sourced from renewable resources, such as natural gas, wind power and solar energy.

South Africa relies heavily on it’s automotive and coal industry for the countries economic development and social growth. South Africa’s car market has grown by 8% since 2017. The international production and trading of electric vehicles is also growing due to the concern of climate change. South Africa will want to remain a significant player in the automotive industry, which will require a greater investment in producing and importing electric vehicles. They are also aware that a major factor of their economy is its reliance on coal. This is why many citizens believe it is either a question of economic growth or the environment. The South African coal industry provides lots of jobs for the country. Fears that if South Africa were to drastically alter its energy model then this would bring adverse effects on the countries employment levels and socioeconomic growth. However, the number of jobs required to change the countries reliance on fossil fuels to renewable resources such as wind power, natural gas and solar energy, could see numerous new jobs available and keep employment levels steady. This could help see the country continue to develop in the automotive industry and promote socio-economic growth, as well bring an end to load shedding. 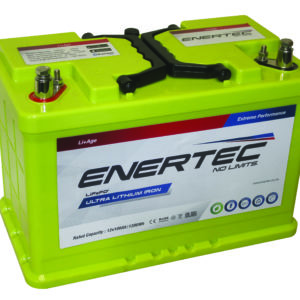 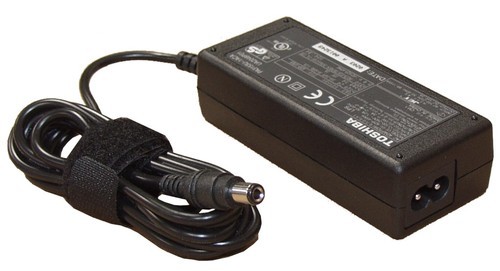 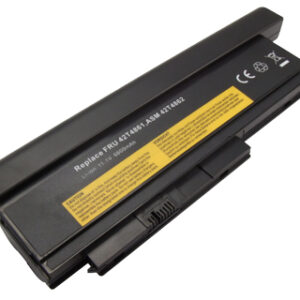 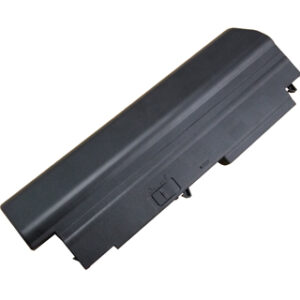 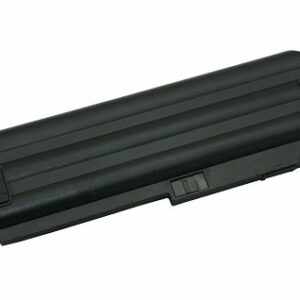